If you have ever wished you were a pirate, this story is for you. When you think of pirates, do you link them to Laguna Beach, California? If not, you are not alone. There have been no pirates in California except for the Raiders, and even they are going to move to Las Vegas. There is no storied history of Pirates in California, so why is there a Pirate Tower in Laguna Beach? So, how the heck did the Pirate Tower Laguna Beach come to be? Let us tell you a yarn about this historic site that will hopefully teach you a little about how eccentric and creative Californians can be.

Victoria Beach in South Laguna is where you will find a fantastic piece of architecture with a mysterious past.

The tower is called the Pirate Tower by locals and is around sixty feet tall. A landmark and magnificent human-made spire, it is slightly askew and looks as though it were carved out from the sandstone cliff surrounding it. Locals refer to it as the Pirate tower because, well, look at it. It is easy to imagine a watchman in the tower searching for pirates to warn the local town folk.

A Pirates Life, Well Sort Of!

The real history of the Pirate Tower Laguna Beach is a little less exciting but still enjoyable. The story began with William E. Brown, a senator from Los Angeles. Senator Brown built the tower in 1926 for his private use and was primarily made to be an enclosed staircase for beach access. Brown himself came to California in 1882, and in addition to becoming a Senator, he was also a renowned painter. He loved the California coastline, especially around Laguna Beach, with all of its beauty. The picturesque backdrops made Laguna Beach a great area to live and to be a painter inspiring him to have easy access to the ocean below. 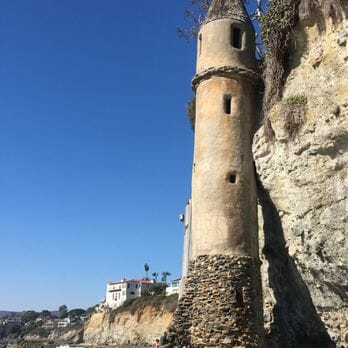 A Pirate Finally Bought the Tower

After Senator Brown passed, Harold Kendrick purchased the Pirate Tower Laguna Beach property in the 1940s. He was a retired Navy Captain and pirate lover. Mr. Kendrick found himself drawn to the home, mostly because of the strange but beautiful tower. Kendrick is known to have been as fascinating as the building itself. He loved playing the part of the pirate and did so often. He was also a beloved neighbor and would often dress like a pirate to entertain local children with games and sea stories.

Over the years, the Laguna Beach property and tower have switched hands several times. The tower is now under lock, and key lost to visitors, slowly and sadly decaying. Nonetheless, the tower is still erect and inspires imaginations of sailors, pirates, black skull flags, and the mysteries of the sea.

Written by Stacy Glasgow from Searchorb Marketing and Media. Stacy is a US Navy Veteran, Aviation, and history buff.