Back in January, astronomers and scientists received the first data from the New Horizons spacecraft. They were elated to find a strange object. From their first look, it appeared to consist of two contacting spheres. These bound spheres are known as a contact binary planetesimals. Ultima Thule, which is named 2014 MU69, looked like a giant space snowman.

Scientists have now had time to analyze additional data and have changed their perspective of Ultima Thule. A secondary set of images as the spacecraft moved away was taken 10 minutes after the nearest approach and they showed a flat rather than spherical appearance.

After further analysis, scientists believe the larger portion looks more like a pancake, whereas the smaller portion is more like a charcoal briquette. The images are taken at a much different angle showing a significant difference from the first images.

Alan Stern said this in a news release about Ultima Thule, “We had an impression of Ultima Thule based on the limited number of images returned in the days around the flyby, but seeing more data has significantly changed our view. It would be closer to reality to say Ultima Thule’s shape is flatter, like a pancake. But more importantly, the new images are creating scientific puzzles about how such an object could even be formed. We’ve never seen something like this orbiting the Sun.” 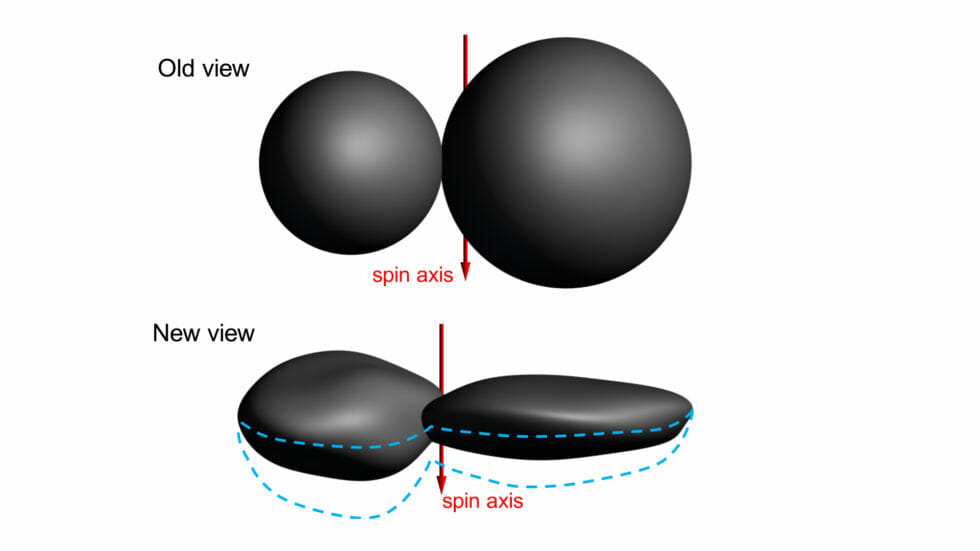 What Is Next For Ultima Thule and New Horizons?

Space probe New Horizons has a ton more data to send back to scientists here on Earth. Scientists will analyze the information after it is sent back over 6.6 billion km. This new information will help to further determine the shape and structure of Ultima Thule. These micro planetary bodies are important to study because they are believed to be pristine planetesimals. They are much like the building blocks that would have been found more than four billion years ago in our own solar system.

Stephen is the owner of Searchorb Marketing and Searchorb Media and has a love for aviation and astronomy. He is a former Naval Aviation Technician where he was trained on H-3 Helicopters and A-4 Jet flight control and hydraulics systems.

About the Author: admin